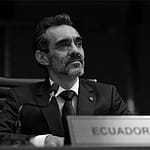 He has worked in film, theater, television, and new digital platforms. His a teacher in workshops and participates, and advises on the making of short films from various film and performance schools in the country. He is known for his roles in La Cordillera (2018), Mono con gallinas (2013), Tinta Sangre (2013),1809-1810 while the day comes (2004) and various roles on EnchufeTv