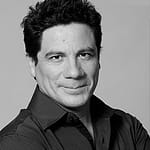 (Lima, Peru, November 1, 1965) He is a Peruvian actor and theater director. Better known by the television series Al Fondo hay sitio. He participated in The Elephant Man, The Conquest of the South Pole, Blood Weddings, Fantastic and other plays. Although he had previously had minor roles in soap operas such as Malahierba and Bajo tu piel, as well as participating in miniseries, his first leading role came with Los de arriba y los de bajo. Odar starred in Octubre as Clemente, a lone moneylender who inherits a newborn girl and who is faced with the idea of starting a family after becoming intimate with his religious sister Sofia; directed by brothers Daniel and Diego Vega. This film won the jury prize in the section "A certain look" at the Cannes Film Festival in May 2010. It also performed in the film Mono con gallinas and Magallanes