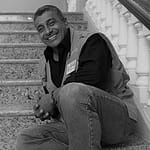 (Manta, Manabi, June 29, 1965), he is an Ecuadorian theater, film, and television actor, better known for his starring role in the movie Ratas, ratones y rateros directed by Sebastián Cordero. In 1979 he was part of the theater group La Trinchera where he started his acting career, he was also part of the Mala Yerba theater group. In 1993 he acted in Los Sangurimas de Ecuavisa, and later he acted in the feature film A la costa, based on the novel of the same name by Luis A. Martínez.In 1994 he had a minor role in the movie Entre Marx y una mujer desnuda, directed by Camilo Luzuriaga. In 1999 he gained greater fame after playing the leading role of a criminal named Ángel, in the movie Rats, Mice and Thieves, directed by Sebastián Cordero, for which he won the Colón de Plata Award for Best Actor in the Huelva Film Festival of Spain. In 2004 he starred in the Ecuavisa series, Los HP. In 2005 he was part of the soap opera from Ecuavisa, Amores que matan, and in 2009 he played the leading role of a sportsman named Vicente Rodríguez, in the movie Fighter, by director Roberto Estrella and was co-star in the movie Hacia la sombra. In 2010 he was part of the cast of the telenovela Mostro de Amor, by Teleamazonas. In 2012 he was part of the cast of the film Pescador by Sebastián Cordero. He is also the director and main promoter of the "Manabí Profundo Film Festival" in his quest to promote culture in his hometown through this film competition, meeting and exhibition.