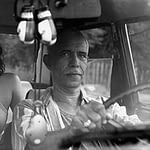 Renowned Panamanian actor with vast theatrical experience. He debuted in the 2001 film "El Sastre de Panamá" with Pierce Brosnam. In 2006, he characterized a guerrilla member in the film “The Art of Travel” by B. La Belle and T. Wehlam. In 2008, he acted in "Quantum of Solace" a film of the Agent 007 saga, directed by Marc Forster. He was also part of the main cast in "Melaza", a Cuban-Panamanian-French co-production.