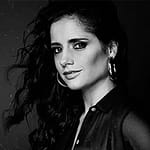 (Lima, September 30, 1977) She is a Peruvian actress and television presenter. She has participated in films such as Ciudad de M, Paloma de papel, Django: la otra cara, Ojos que no ven and Mariposa negra. With the latter, she won two awards for best Latin American actress at the Malaga Spanish Film Festival. Among her various roles, she is known for her starring role as Monserrat Chafloque aka "La Monsefuana" in the television series Al fondo hay sitio.