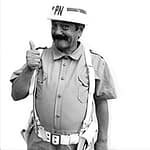 Eduardo "Mosquito" Mosquera better known as Cabo Mosquito is an Ecuadorian theater actor. The character for whom he is best known and to whom his artistic name is due is Cabo Mosquito, he has played it both on stage and on television. His television career has been in comedy shows such as Dejémonos de Vainas, Ni en Vivo Ni en Directo, Vivos, Superespías, Calle amores, among others. In the theater, he has staged works such as Qué badulaques (1998), Cholo soys (2000), Piedras en sus bolsillos (2002), A la bio a la bao, Tempo Clown (2012), among others, along with the European actor Christoph Baumann . With the theater group Vereda, he participated in the International Mime Festival in Argentina, and traveled to countries such as Colombia, Uruguay, the United States and Brazil. In 2010 he was part of the movie Zuquillo Exprés. Mosquera and Baumann have also formed the acting cast of several Enchufe.tv skits.