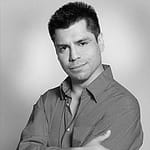 (Lima, Peru; April 20, 1977) He is an actor known for his role in Días de Santiago, for which he received international awards, including Best Actor at the Buenos Aires International Independent Film Festival and at the Providence Latin American Film Festival on Rodhe Island. On television he starred in the series Mystery, Sea Lions and The Great Blood.