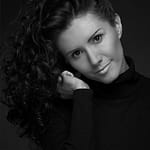 Actress, Bachelor of Arts-Theatrical Performance, with a Higher Diploma in Performing Arts in 2005 from the Central University of Ecuador, during her tenure at the Cultural and Artistic Corporation El Callejón del Agua 1994-2010, created by Jorge Mateus, participates In more than a dozen works, with the group they present many of their works in Ecuador, the United States, Chile, Spain, Italy, Egypt, Israel, Venezuela, and Brazil. In 2011 a new stage begins as an independent actress, she acts in La Casa de Bernarda Alba directed by Jesús Cracio (2011 and Lisístrata directed by Diego Aramburo (2012), later she is invited by Cristina Rodas to participate in her productions: Machos 2013, Toc toc 2013, Burundanga, 2014 as Co-Director, 2014 Los 39 Escalones. She has dabbled in radio-theater, TV, feature films, short films, commercials, voice dubbing, etc. In 2011 he begins, as part of the cast, the filming of the movie A These Heights of Life by Alex Cisneros and Manuel Calisto, the film opens in May 2014 and the film participates in some international festivals, the New England Festival of Iberoamerican Cinema, it is she who comes representing this film. In January 2015 as a producer, she staged A Streetcar Named Desire of Tennessee Wiliams, under the direction of Jorge Mateus, also intervening as an actress in said production and presenting for the first time in Quito-Ecuador