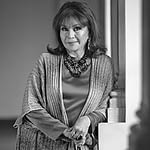 Toty Rodríguez, whose real name is María Rosa Rodríguez Váscones, is a prolific singer, model, theater and film actress in Ecuador and France, television presenter and former Miss Ecuador. While in France, she was part of several plays, operas, and was recognized for her participation in the film The Great Restaurant. After several years of being away from the theater, she returns with the play Mano a mano directed by Viviana Cordero, shortly after she appeared in the works Tres, De arrugas y bisturís and in 2003 she was part of the movie Un titan en el ring. That same year she became the presenter of the reality show El Gran Hermano, a version of the Dutch franchise broadcast by Ecuavisa under the direction of Paco Cuesta. For the year 2004, he is part of the cast of the soap opera I Sell Black Eyes, together with Giovanna Andrade and Khotan Fernández. In 2011 he presented the play ¿Amor?... Puertas afuera and in 2013 La Pastilla del Día, both works with the actor Mosquito Mosquera. Since 2013, her nephew León Felipe Troya Rodríguez, has been making a documentary about her life, called Mi tía Toty.