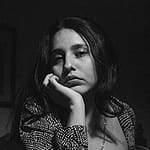 Anais Delgado born in Quito, Ecuador. She is a 25-year-old audiovisual producer, art director and actress. She studied at INCINE and later traveled to Argentina to obtain her degree in Comprehensive Audiovisual Production at the National University of the Center of the Province of Buenos Aires (UNICEN) in the city of Tandil, Argentina. Her short film "AURORA" written, directed, and acted by her, was released in 2018 and has had a tour of national and international festivals, being awarded in the 5th edition of the Latin American Film Festival of Quito for best female performance in a short film. She is currently in the process of editing a documentary filmed in Belgium, Argentina, and Ecuador.