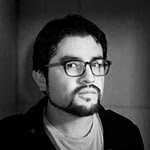 Ecuadorian screenwriter and director. His short film “Vida”, developed in the workshop “Filming in Colombia with Abbas Kiarostami” has been presented in more than 20 countries, receiving various recognitions. In 2016 he directed the documentary "7 Muros" for the DOCTV Latin America series. The same year he published his first book "El principito y el zorro de los Andes". In 2017 he produced the short film “Frontera”, selected for the Annecy International Animated Film Festival. In 2018 he made the short film "Un año, una hora, un deseo", honorable mention for the "Ernesto Albán Mosquera" award. In 2019 he was selected for the workshop "Filming in Navarra with Asghar Farhadi" where he made the short film "Ovejas", selected for the Navarra International Film Festival and winner of the Augusto San Miguel award. He currently produces the documentary "Vitium" and develops the documentary "Shell: Tierra de campeones".