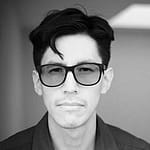 Producer and director of cinema and television specialized in the production of animation projects, he has produced children's series for Ecuador TV such as "Súper Felipe" (2014-2016) and "Kikuyo" (2016). He is a scriptwriter and director of the short film “Frontera”. He was selected to participate in the "Andimation" Project Accelerator, organized by The Animation Workshop and co-financed by UNESCO, and is a screenwriter and director of the animated series for adolescents "Ugamú" winner of the MIFA pitching of the International Festival de Cinema de Annecy (2019).