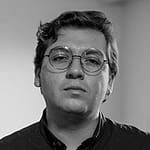 (May 28, 1994, Quito - Ecuador) is an Ecuadorian film director, he has worked as a writer and cinematographer for several national productions. Graduated in audiovisual and multimedia production, best known for his debut project Proyecto Bullying, with which he debuted as a director and participated in the Marché Du Film at the 2019 Cannes Film Festival and DocMontevideo 2019. He has worked as a creative director for several renowned brands and artists from his country. Currently, he is writing his second film and doing various entertainment projects with his audiovisual production company BKD Entertainment.