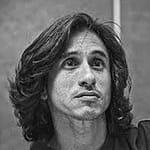 Fernando Mieles is a film director and screenwriter, born on May 18, 1970 in Guayaquil, Ecuador. He studied at the International School of Cinema and Television of San Antonio De Los Baños-Cuba (EICTV 1992) in the specialty of directing. His works include the short films En un meandro de la Estigia, Opus Nigrum and Tree of Life. On his return to Ecuador he made documentaries and scripts for television. His most outstanding documentaries are Aqui soy José, Descartes and Prometeo Deportado, a film that received several international recognitions. Since 1998 Mieles has been a professor of Script, Film and Filmmaking at the Catholic University of Guayaquil.