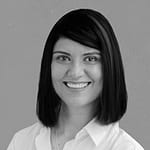 Director, actress and acting teacher, Frusan studied theater at California State University, and obtained her master's degree in acting at the Actors Studio (New York) where she studied alongside renowned Hollywood actors such as Martin Landau, Ellen Burstyn, Lee Grant, and Al Pacino. In partnership with the Italian production company "40 Productions" he directed and produced several short films in Italy and Ecuador, which have been recognized internationally. His short film “Caso Perroni” was a finalist at the Guayaquil Film Festival and the Oaxaca Film Festival, as well as receiving a special mention at the London Word-Wide Comedy Short Film Festival. Frusan is currently in preparation for the feature film version of Caso Perroni, which is in the development stage. He also continues directing and acting in plays in Ecuador. His play "Lost in Space" was premiered at the CCI Theater in Quito and nominated for "best staging" at the Open Arts Festival in Miami. Frusan has been an acting professor at the Los Angeles Performing Art Conservatory (LAPAC), Academia Musical, The School (MTS) in Milan and in the Master's in Acting at the Central University of Ecuador (UCE). His specialty is teaching the Actors Studio Method, particularly the technique of Michael Chekhov and Sanford Meisner.