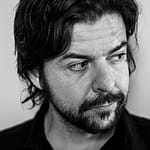 Javier Izquierdo was born in Quito, Ecuador. He studied Social Communication and Literature at Quito universities and worked as a freelance journalist and photographer. In 2003, he presented the documentary “Augusto San Miguel died yesterday”, about the legendary figure of the first Ecuadorian filmmaker. This work has been exhibited in festivals and exhibitions in Ecuador, Colombia, Cuba, Spain and Italy, as well as on Ecuadorian television. It was distinguished as the “best national audiovisual production of the year” by Diario HOY. Between 2003 and 2010 he lived in Europe, where he did general film studies at the script's Accademia Griffith in Rome feature film at ESCAC in Barcelona and development of film projects at the Student Residence in Madrid. In this city he was the organizer of the first extensive exhibition of Ecuadorian cinema at the international level, "Reinvention of a handmade cinema", presented at Casa de América in 2004. He was also a professor of film script in the Creative Writing Program of the Autonomous University of Barcelona (UAB) from 2008 to 2009. Since his return to Ecuador in 2010, he has worked as a screenwriter and director, festival and show programmer, film journalist and university teacher. He is scriptwriter for the Chilean fiction short film “Una cama” (Mention of the jury, Festival Cine B, 2014), by Claudia Carreño and Javier Zoro, and the documentary “Instantes de Campaña” by Tomás Astudillo (Visions du Reel Premiere, 2015). In 2016 he released the feature film “A secret in the box”. He is developing the feature films "Panama" and "Barajas", which in their pre-production stage have been selected in important international workshops and laboratories.