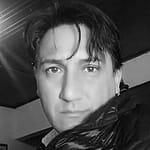 From a very young age he dedicated himself to the world of cinema and television; he studied production in both fields. In 2005 he started his project to rescue the legends and traditions of our country, for which he has trained actors and actresses in various cities like Ambato, Guaranda, Riobamba, Quito and Ibarra among others. The legends that she has brought to the big screen are: “La Viuda of El Tejar "," La Caja Ronca "," The Lady of the Highway "," The Duende Satiro ”,“ Mariangula ”,“ Anthropofagas ”and“ La Chica del Lago "all of them belonging to the collection" Ecuador Myths and Legends ”. "The Lady of the Road" and "El Duende Satiro" were chosen as best film 2016 and 2017 by the public in the competition organized by the page "Renaissance of Ecuadorian Cinema" and the blog “Cinéfilos del Ecuador”. In addition, "El Duende Satiro" was the highest grossing film at Cinemark on Paseo San Francisco. The Jorge Bastidas' last feature film "La Chica del Lago" was awarded for best film by public vote at the IX edition of the Ecuadorian Film Festival Kunturñawi in November 2020.