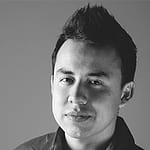 (26 years old) filmmaker, journalist, actor and screenwriter. Director and founder of Lunatics Productions, an independent film production company with which he has made 12 short films that participated in over 30 international festivals. His work has been shown in countries such as Finland, Spain, France, Mexico, among others. Obtaining different awards and recognitions, like, best Latin American short film at the Argentine festival "Libercine", for the documentary short film "Women in front of the Mirror". His most outstanding short films are: "The Gospel according to Matthew", "The reflection of Antonio", "The thousand and one stories of Ernesto". He has obtained scholarships to participate in the ILGALAC conferences, in Bogotá and Guatemala in 2017 and 2019, as well as participated as a fellow in the Ecuadorian delegation in the "Forward International Summit with the conquest of LGBTI rights", held in La Paz - Bolivia in 2017