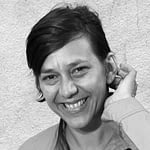 She has served as a producer, executive producer, and production manager on Ecuadorian television and in several films such as Rats, Mice, and Thieves; While the day comes; Chronicles and Fisherman. She is co-founder of the International Documentary Film Festival Encounters of the Other Cinema in Ecuador. He co-directed with Manolo Sarmiento the documentary Personal Problems, which deals with the issue of Ecuadorian migration to Spain. She is currently the general coordinator of the Technical Unit of the DOCTV Latin America Program of the Conference of Audiovisual and Cinematographic Authorities of Ibero-America.