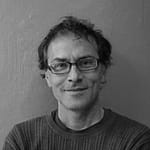 Manolo Sarmiento (Portoviejo, 1967). Documentary filmmaker and Ecuadorian journalist, co-director of the documentary "The Death of Jaime Roldós". He has worked as an audiovisual producer, lawyer and journalist. He directed reports for various television magazines between 1994 and 1999. He won the national journalism award Symbols of Freedom in 1998 in the category Best Television Report. He was co-founder and since its foundation has been the executive director of the International Documentary Film Festival, Encuentros del Otro Cine, which held its XIII edition last May. He was an editorialist and columnist for the newspapers TODAY and El Telégrafo and periodically for several years the blog Al interior del Otro Cine. He has been a juror in the documentary category at the Guadalajara and Lima festivals, and advisor at the Talent-Doc documentary project development workshop in Cochabamba.