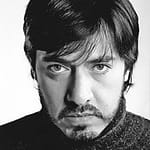 (1968 - June 21, 2011, Quito, Ecuador) was an Ecuadorian actor, screenwriter, producer, and film director. In 1995 he starred in the short film The Great Return, directed by Viviana Cordero, where he played Carlitos, a migrant who returns to Ecuador after his exile to the United States out of necessity, this defined his decision to make films. The short film was screened at the Demetrio Aguilera Malta Festival and due to its success, it was extended to a 22-episode television series broadcast by the Teleamazonas signal, and it also conducted the Cinefilia program, where it conducted interviews with characters from the production and audiovisual culture of the country. He starred in the film When I Touch Me, by director Víctor Arregui, for which he received the Male Performance Award from the Biarritz Festival of Cinemas and Cultures in Latin America in 2006 and as Best Ecuadorian Actor in the 2010 Colibrí Awards, which It was carried out by the National Council of Cinematography (CNCINE) and the Ministry of Culture. In the film, Calisto plays a medical doctor named Arturo Fernández and acted alongside Juan Martín Cueva, who played the role of his gay brother , called Jorge Fernández. He played the secretary of García Moreno, in an adaptation of Edgar Allan Poe's work, The truth about the case of Señor Valdemar, a production by Carlos Andrés Vera. He was also part of the short films Croñañones, Pasajeros, 6:03 and Plan B.4 He acted in small plays such as Little Marital Crimes and The Grönholm Method, alongside Cristina Rodas and Pepe Vacas. In May 2011, he shot his first film, the film A las alturas de la vida, which he co-produced, co-directed and co-starred with his friend Álex Cisneros, where actress Sonia Valdez also participated. Upon his death, he could not be present in the post-production process of the film that was planned to be released in July, which took more time and with difficulty for his friend Cisnero, who released the film in 2014