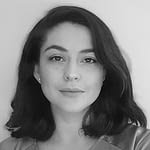 Marcela Camacho Pardo, Ambato 1986. She studied Digital Media in Film and Television at the San Francisco University of Quito; with a sub specialization in Performing Arts at the same university. Since 2009 it begins with the implementation for the development of entrepreneurship and art projects such as cinema, theater and audiovisual; director, producer and cultural manager. Production, reporting, editing and coordination of news on national channels such as Ecuavisa and Teleamazonas. Member and part of the board of the ADEC Association of Documentalists of Ecuador, member of the Women Action CAM Collective, director of GESTIONARTES ECUADOR, online management platform to promote artistic ventures and projects at the Ecuador level. As a film director, she has made several productions, including: Documentary Direction El'49 2017; Documentary direction "Tena a century later" current; Creative production and management of the documentary film “La Danza del Niño Maestro”.