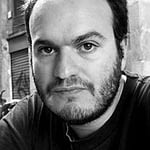 Mateo Herrera was born in Quito in 1973. He studied Audiovisual Communication at the ARCOS Audiovisual Institute in Santiago (Chile) and Audiovisual and Multimedia Communication at San Francisco University (Quito), before starting his professional activity, directing commercials and short films for producer Primal. In 1998 he published the feature film Ratas, mice y rateros, by Sebastián Cordero, with which he won the Best Edition award at the Festival of New Latin American Cinema in Havana in 1999. In mid-2000 he made and wrote his first feature film, Alegría at once, with which he participated in 12 international film festivals and won two awards, Best Film and Best Screenplay, at the Atlanta Dahlonega International Festival (2002), in addition to receiving a wide reception from the public. In 2003 he produced and directed Jaque (2003), a feature film that reached First Place in the Section of Films in Progress of the First Iberoamerican Film Festival of Quito Zero Latitude. Recently he has just filmed the short film entitled Nobody would notice it, regarding the case of the notary Segundo Cabrera de Machala, and El Comité (2005), his first documentary feature film that he also wrote. He has also worked as a screenwriter for his own films El Comité (2005) and Alegría de una vez. Likewise, he has carried out the work of editor in some of his films and of other filmmakers, such as There are things that are not said (2005) and Rats, mice and thieves (1999), together with Sebastián Cordero. The filmmaker has also ventured as a composer of two of his films: Jaque (2003) and El Comité (2005), in which he was in charge of the sound.