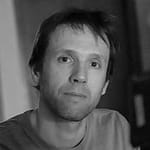 He trained as a film director at the San Antonio de Los Baños International Film and Television School (EICTV, Cuba, 2000-2002), where he wrote and directed various short films (fiction and documentary) in 35mm, 16mm and digital. His documentary Habana MMI is selected at the 1st Barcelona International Documentary Festival (Docúpolis, 2001). Other works include El mar, Porquería (16mm), En Invierno, and Abrego (35mm). Since 2011 he has been a partner in the Ecuadorian production company Cámara Oscura, where he works as a director, screenwriter, and photographer. In parallel, he carries out test work, including the medium-length film El Lugar interior (2011), shown at the Cosquín International Independent Film Festival (FICIC). In 2011-12, he directed Eso Es Liga, a weekly TV program finalist for the best ITV sports program 2012. Between 2013 and 2017, he wrote and directed the documentary feature film Tayos: a world under your feet, exhibited in cinemas nationwide in 2017, as well as at international festivals in different countries. He is currently writing and directing the documentary feature film Jaime, recipient of international co-production funds from Ibermedia 2019.