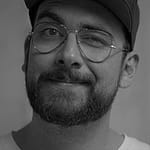 Pablo Arturo Suárez, Ecuadorian director who studied Film and Video at the San Francisco University of Quito in 2010, “Mateo” (2009) and “1972” (2010). In 2011 Pablo completed a Master's Degree in Cinematographic Direction at the Escola Superior de Cine y Audiovisuales (ESCAC), directing two short films, "La Guitarra" (2011) and "When Morning Explodes" (2013). He is currently in the post production of his first feature film "So different the two" and the documentary "We are invincible" and develops projects in the national and international audiovisual field.