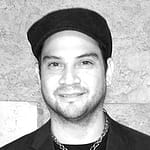 Born in Guayaquil, 1980. Journalist, Bachelor in Social Communication - with a mention on Audiovisual, he graduated from the Catholic University of Santiago de Guayaquil. Director, producer and screenwriter. In 2003 he directed the short film Libido and in 2004 the half-length documentary film Lagarteros; Both films were made as a student at the Catholic University of Guayaquil. Since 2005 he has worked in various audiovisual projects for television, specializing in the field of educational communication, as a scriptwriter and a content coordinator at the Guayaquil municipal program Aprendamos (from 2007 to January 2020). Spirit of 98 (2018) is his first documentary feature film. He is currently content coordinator at Awen Estudio Creativo.