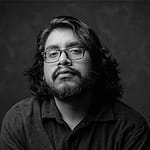 Graduated in audiovisual design and production, he is a self-taught director and cinematographer also known under the pseudonym "Richie Starr". In 2016 he worked as cinematographer on the feature film "Nice Guy Julio", this being his first film project in collaboration with "Renacer Films". Since 2017 he started directing his own personal and commercial projects, including corporate spots, content for networks and music videos. In 2019 he wrote and directed his first short film “La Parca”, a project that would win several national awards, including “Best Fiction Work”, “Best Edition” and “Best Photography” at the “Vista Previa” festival in the city of Guayaquil.