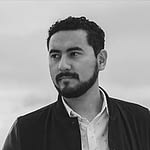 Ecuadorian filmmaker. Master in Cinematography from the London Met Film School, thanks to the “Voices That Matter” scholarship. He has participated in several audiovisual projects that include films, documentaries, music videos, commercials and corporate videos. He has experience filming in different settings and countries like Ecuador, England, Scotland, Holland and the United States. His “Ruta viva” project, carried out in co-production between USA - Ecuador, has been a participant and winner in several festivals around the world, including the award for best international short film at HBO's NY Latino Film Festival, who in turn acquired the film for their HBOGO channel and platform. His film project filmed in the United Kingdom, "Love To Remain", has also been highlighted on the festival route, being accepted at world-class festivals such as the Festival of New Latin American Cinema in Havana in Cuba, the 30 Under 30 Film Festival supported by UN Women ("Best Edition" award), Quito Latin American Film Festival FLACQ ("Best Screenplay" award), Global Dominican Film Festival, FICQ, among others. Similarly, his film project “La Cigüeña” was credited to the ICCA Film Promotion Fund 2017 in Ecuador, which is soon to be released and, in turn, together with its producer Peacock Films, have been beneficiaries for the production of a serial bible. animation titled "The Elementals of Ikianá". The last feature film projects he was involved in were “2 days in Quito” in co-production with UK and “Galatea” and he is currently preparing to photograph the feature film “Viejos Malditos” (ICCA Development and Production Award) as well as “Taximeters ”From the director Sebastián Trujillo. Currently, he works as a professor at the University of San Francisco de Quito, training new generations of filmmakers. In addition to his film career, Sebastián makes New Media works of art, where he explores recurring themes with video, light and interactivity; as well as being an active member of the Ecuadorian Association of Photographers.