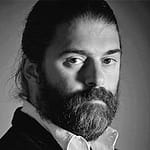 He was born in Quito, Ecuador in 1972. At the age of nine, he moved with his family to France, where he lived for six years. In 1990 he began his studies in film and screenwriting at the University of Southern California, in Los Angeles. In 1995 he returned to Ecuador with the idea of making a feature film. He produced short films and music videos for local groups serving as director, photographer, and editor. During that time he wrote the screenplay for "Ratas, ratones y rateros", his first film, which was made in 1998. The film was released within the Official Selection of the Venice Festival, participated in more than 50 festivals, and won more than 12 international awards: Best Film and Opera Prima at the Latin American Festival in Trieste (1999), Best Actor and Opera Prima at the Iberoamerican Festival in Huelva, among others. The film becomes a social and cultural landmark in Ecuador, remaining for six months on theaters.