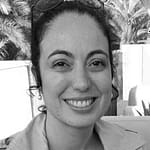 Xiana Yago was born in 1984 in Valencia (Spain), graduated in medicine in Barcelona and in 2009 moved to Berlin, where she works part-time as a doctor and assistant director. In 2012 he completed a Master's Degree in Screenwriting for Film and TV at the Carlos III University of Madrid. In 2014 he co-wrote the Ecuadorian-Bolivian documentary “Ukamau y ké” (2017). Later he produced and directed his first documentary feature film “Las Mujeres Deciden”, awarded with the documentary production fund (2013) and distribution (2016) of the National Film Council of Ecuador. Xiana is currently developing her second documentary feature "Wilder / Salir", about the stigma in mental health in Bolivia.